Sir Lewis Hamilton and Sebastian Vettel fiercely battled for the World Championship in 2017 and 2018.

Sir Lewis Hamilton has opened up on how incredible it is to be able to call the retiring Sebastian Vettel a “good friend”, despite the pair having been fierce rivals only a few years ago.

The two drivers, who have 11 Drivers’ World Championships between them, were entangled in a ferocious battle across 2017 and 2018, with the Mercedes driver coming out on top in both campaigns.

Vettel was, of course, Ferrari’s star driver at the time, and in all fairness the Scuderia had the stronger car compared to the Germans.

However, in true Ferrari fashion, strategic errors and a famous driver error at the 2018 German Grand Prix saw the Italians fall short once again, whilst Hamilton overcome adversity in his usual fashion. 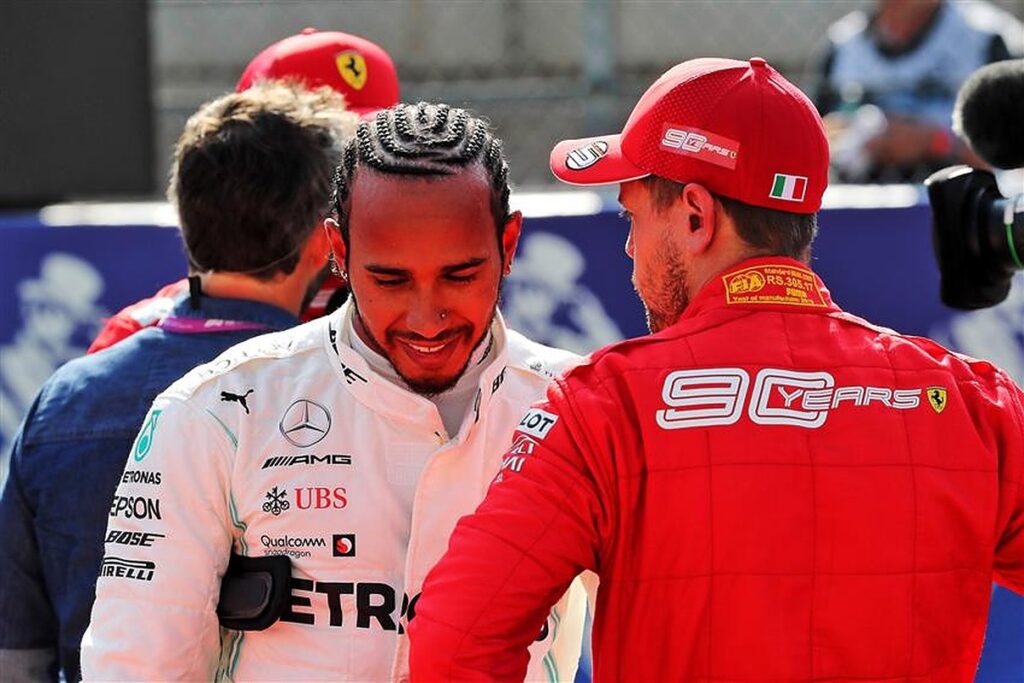 The 2019 Canadian Grand Prix was another key moment in the pair’s rivalry, after Vettel famously swapped his number two parc ferme sign for Hamilton’s number one.

The incident arose after the Aston Martin driver was awarded with a time penalty for supposedly re-joining the circuit unsafely after forcing Hamilton into the wall, following a mistake which saw him slide across the grass.

Whilst the German won on track, he was demoted behind Hamilton after the penalty was awarded.

He accused the race director of “stealing the race” from him, in what was another highly debated incident between himself and Hamilton.

Incredibly, the pair have gone on to become very good friends, something which has been seen through the support they’ve demonstrated for one another.

Hamilton was famously consoled by Vettel after the 2021 season finale; the pair have also taken a stand together against a number of political issues.

Both the Brit and the German have been profound activists in support of campaigns and communities such as environmental change, Black Lives Matter and LGBTQ+.

Hamilton recently opened up on how challenging it can be to get on with somebody once you’ve had a “head-to-head battle” with them, especially after going through “psychological warfare” during the battle.

“To have the respect between two people who have had tough battles – it’s hard to be friends when you’re having a head-to-head battle and one of you is and one of you isn’t winning,” Hamilton told RACER.“The psychological warfare you go through, it’s tough.

“The psychological warfare you go through, it’s tough.

“But to be able to come out from that and be such good friends – and I think it will continue to grow and we’ll be even better friends in future – I’m really grateful for.

“We’ve had some great races in the past and I’m so proud of him, of how he’s gone through his journey and how he’s opened up and how he’s been outspoken, and continues to be

“I have no doubt whatever he plans to do in the future, he will continue to do so.”